(WHEELING) The annual Wheeling Feeling Chili Cook-off is set for Saturday, June 2nd, at Wheeling Heritage Port. The event features award-winning chili and entertainment by Steal Casa and New Age Adenas from 11:00 a.m. to 5:30 p.m. Attendees can purchase tasting tickets (2 tickets for $1.00) from volunteers stationed throughout the cook-off site. Proceeds from the cook-off benefit the United Way of the Upper Ohio Valley

“I feel safe in saying that the quality of the Wheeling Feeling Chili Cook-off is the finest in the country,” Rose Humway-Warmuth, Cook-off Chairperson said. “Its continued success is due to the commitment of the City of Wheeling and its employees, volunteers from the United Way, chili cooks and teams who make chili and serve it with a smile, and the public support for the event.” 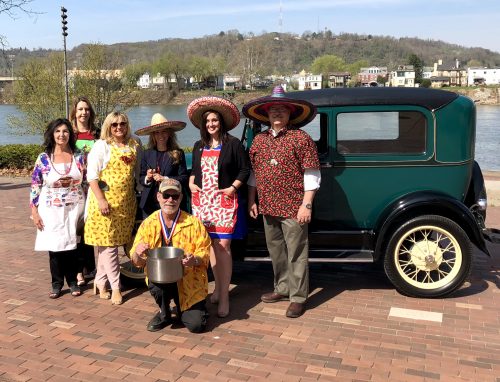 More than 30 individual cooks are scheduled to compete in the Annual Wheeling Feeling Cook-off, along with a dozen commercial entries. The top winners in the International Chili Society (ICS) competition categories (traditional red, verde, salsa and home-style) are eligible to compete in the World’s Championship Chili Cook-off in the fall at Gateway Motorsports Park, St. Louis. This year there is a new and exciting category for youth cooks from 6 to 17 years old. First time cooks get a free entry and returning cooks get a huge discount in registration.

More than $5,000 in prizes will be distributed based on the judges’ rankings. The judging tent houses more than 50 local judges throughout the day, under the leadership of the “Head Chili,” Brian Warmuth. “We strive to have a first class cook-off and this year is no different as several of our ICS cooks will be serving chili that has won top spots at the World Championships,” said Warmuth. All of the votes cast are tabulated by the accountants at Wilson, Kozciki and Gwynn, PLLC.

Information is available by calling 304-234-3636 or emailing rhwarmuth@wheelingwv.gov.